Cues are an essential part of interactive shows: they allow to record a set of controls and messages that will be applied at a single point in time: OSC or DMX messages, MIDI control changes, etc.

In score, cues are messages that are contained inside states.

Cues are created by drag’n’drop, from a set of Device explorer nodes, to the score.

It is possible to add messages to a cue by dropping on it. Existing messages to a given address will be replaced by the value that is being dropped.

If you want to replace the parameters of a cue with their current value in the explorer, you can click on the state. The state inspector has a “Snapshot” feature which will update all the values stored in the cue, with their current live value. 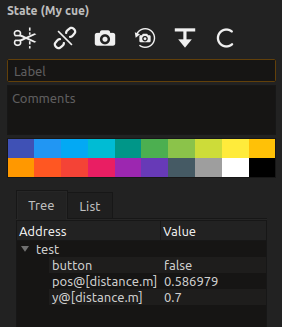 Cues will be played automatically when the score execution reaches them:

It is possible to play a cue through the “Play” tool in the user interface.

Playing a cue with an external control

It is possible to entirely control when a cue is going to be sent, by adding a trigger on it and let it “float” in the scenario.

Such a floating cue can originally be created by double-clicking on the scenario (or drag’n’dropping directly from the Device explorer, and removing the created interval afterwards).

Then, one needs to add a trigger (through the inspector or by pressing T when the state is selected), and configure it for out-of-time playback.

Here is how this would work: 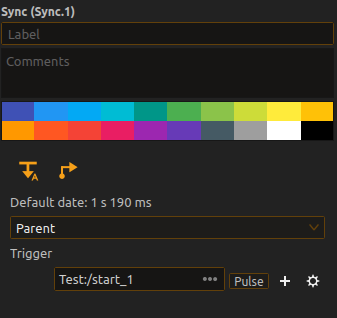 Notice in particular that the two buttons, “Auto-Trigger” and “Start on play”, are checked.

It would be possible for instance to trigger the cue when a MIDI CC reaches a specific value or similar.

See Breaking the timeline for more information on triggers.