The timeline nature of ossia score may make it look like it is not very amenable to live coding ; that could not be farther from the truth !

Editing the score during playback

It is possible to edit every part of the score while it plays, and most importantly, start or restart those parts.

Most places in a score should be editable during playback ; if you encounter issues, please file a bug report ! In particular, processes, sounds, shaders, etc. can all be added, removed, altered during playback.

There is one important exception, that we have not lifted yet: it is not possible to add a new device during playback ; you must prepare the devices to be used before hitting play. For instance, it is not possible as of ossia score 3.0.0-b1 to open a new window for visuals or plug a new MIDI keyboard in the middle of a performance.

A very simple trick is then to use triggers to keep the parts running forever: this way, the intervals that are running that way will keep running their processes forever, like for instance would a Max or Pure Data patch.

Here is a small example:

A few processes in score use textual scripts: 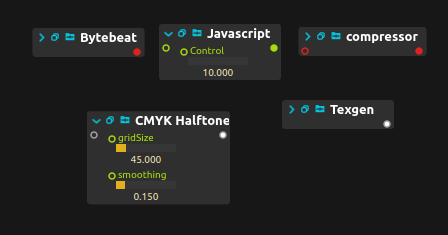 In all cases, the script can be edited with the small “Window” button on the header of each of the corresponding nodes (the second button).

When that button is pressed, this opens the script editor, which can be used to change the code. When you are done editing, press “Compile” ; this will update the code for the execution engine. Invalid code won’t change the current state to prevent unwanted loud noises and flashes :-)

It is possible to use the Ctrl+Enter(Win / Linux) or⌘+Enter(Mac) shortcut to update the execution engine with the current code.

The pane at the bottom of the window will display the error log: here, we have some slightly invalid code on line 9 for instance.