Getting ossia score on the Microsoft Store

TL;DR: we released ossia score on the Microsoft Store, support and fund the development by buying it there! 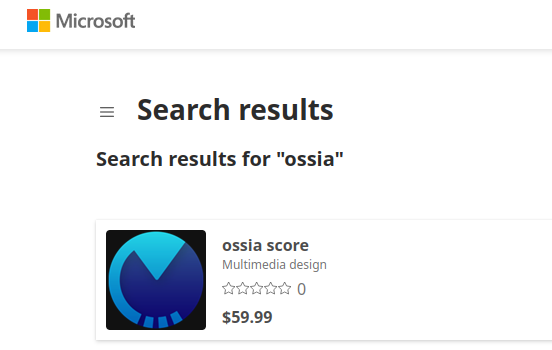 ossia score is an interactive and intermedia sequencer: it allows to score multimedia content and processes in an interactive timeline, such as sound, MIDI, OSC messages, gamepad controls, video, VST plug-ins, scripts, with a specifically tailored visual language.

What a drag this was! The Microsoft documentation is fairly complete, but also full of pretty old data – it is for instance not really clear how putting a Win32 app relates to UWP, to which version of UWP as the docs describes different ways between Windows 8 and Windows 10, etc.

But, in the end, we managed to get a reproducible procedure that I’m happily sharing here to allow other open-source software to be distributed there – it can be for instance mostly automated in Github Actions. In particular, it can likely be useful for anyone who uses a CMake / Qt / Clang toolchain (or any MinGW-ish toolchain) for building on Windows.

First you need to register as a Microsoft Partner.

A ton of different assets are required. Fortunately, it turns out that Visual Studio can generate them in the required format from a single base logo.

Of course, one could also generate them from a well-thought-out imagemagick script, if anyone has one please share it!

This is the manifest that describes the package for your software. The one we made can likely be used as a source. Note that this is a .in file to indicate that we are generating it from CMake (to set the version number from the git tag, mainly).

You must in particular fill in the various identity-related variables that are available on the Microsoft Partner account:

Here you’ll see variables such as:

which are to be copied in Package.appxmanifest’s <Identity> and <Properties>, as well as a few other places mentioned later in this post.

The important steps for Win32 app validation to pass are:

A few “fun” stuff I encountered while writing the XML:

This file is used to describe all the sub-packages that compose your software: it can allow to do elaborate things such as providing a separate AMD64 and ARM64 pacakges, plus a separate asset package for the architecture-independent data such as images, sounds, etc.

The most important thing to notice is ManifestPath=".\manifests\Package.appxmanifest".

This has to be the path to Package.appxmanifest, relative to the folder from which you are going to run the packaging procedure.

Yay, more XML! You also need to make sure that your main application executable has a valid manifest associated, with explicit high-DPI support.

We generate ours from CMake as at some point there’s likely going to be a version number in there too.

The important steps are:

We now have all the data required for creating an .appxbundle. Apparently one can also generate a .msix / .msixbundle but, well, appx works!

The submission requires the code to be signed with a certificate, which matches the information provided by Microsoft:

We can use Powershell to generate a self-signed one – thanks to OpenTTD for the example!

Here the subject and password are passed through Github secrets ; it’s not really necessary though as the certificate is regenerated for each build. From what I could read, Microsoft will then replace this certificate with their own once they validate the app and make it available to the store.

For instance, to generate a certificate for your own use on a dev machine, with the very strong password “toto”, it would look like:

Be careful with rogue spaces, everything must be exactly as given on Microsoft’s website! Once done you should have a certificate file generated in c:\myapp\mycert.pfx.

In it you should have:

Note that if you made any mistake in the Package.appxmanifest, this will fail and you’ll have to dig through the errors to understand what went wrong… good luck!

If this step fails, it is likely that the Package.appxmanifest file’s fields (Publisher=, etc) do not match the information used while generating the certificate.

If it works, congrats, we can move on to testing!

One thing that bugged me the most was allowing the .appxbundle to install as it requires Windows to trust the generated certificate (which it won’t just by generating it).

I read a lot of StackOverflow answers and none did work – e.g. adding the certificate manually from the generated .pfx file into Local Machine > Third-Party Root Certification Authorities or Root CAs, etc etc. What worked was right-clicking on the .appxbundle and adding the certificate from there (to the same location, Local Machine > Third-Party Root Certification Authorities) instead of from the .pfx file.

From there the app can install by double-clicking the .appxbundle, and you can finally try to run it from the Start menu! If it works, we are nearly there. If it crashes, well, time to inspect some coredumps :-)

This utility validates that the package is well-formed and does not have basic issues. The same checks will also be run by Microsoft when you submit your app so it’s a good idea to run it locally as it will be much faster – Microsoft will reject your app if it does not pass. Simply pass it your .appxbundle to ensure that it passes.

Note that you may have errors show up in the “Optional” section if your program calls child processes, etc. It won’t make the submission fail even if “error” is written in a scary red but apparently it will prevent your app from being installed on restricted Windows versions.

Note that if you really want your app to work there and you use Qt, you will likely have to rebuild Qt by passing -no-feature-process to configure in order to disable the calls to CreateProcess that are in QProcess’s implementation, even if you do not use QProcess directly. Likewise for any other dependency you use which may have calls to LoadProcess and ShellExecute.

When it’s good, congrats, you can finally submit the package to the store and cross fingers for it to be quickly validated!

← Collaborative and distributed interactive scores
Back to all posts